Rockin' in the Three-World: We've got Gekko! 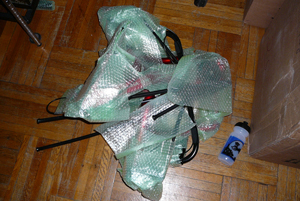 For those of you who choose to rock the three-wheeled-world, I've got two words: "friggin' awesome."  This thing -- the Gekko fx -- exceeds all expectations. 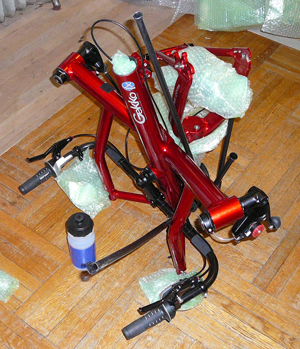 I'm still in the middle of unpacking this baby.  It always takes time, HP Velotechnik is generous with packing material.  And I have already discovered a secret feature that HP Velotechnik does not advertise!  And it's not that the name is Gekko, not Gecko.  No, it's something else entirely.  They didn't tell me this, I never expected this.  I'm not going to say what it is -- I like that it's a secret -- but this is the coolest friggin' thing I've ever seen on a folding bike of any format, recumbent or standard frame.  I'll give you a clue: Brompton does something similar (different, and more British, but similar).


I put a water bottle in the picture so you get a sense of scale.  Compact.