Our neighborhood was spared (assuming nothing more happens).  The electricity is on this morning and there wasn't any flooding in our neighborhood which is in a high area of Brooklyn. When the wind dies down, I may go out and look around the neighborhood, but otherwise I plan to spend the day repairing and tuning bikes -- my own bikes for a change -- and doing things around home that I kept putting aside during the busy season.  That should be nice.  Feel very lucky.

What I'm riding in town these days.

For the past few months I've been riding a Cruzbike Sofrider around town as my city "beater."  The Sofrider is a capable commuter and touring bike, but it's not immediately obvious how properly to attach luggage. 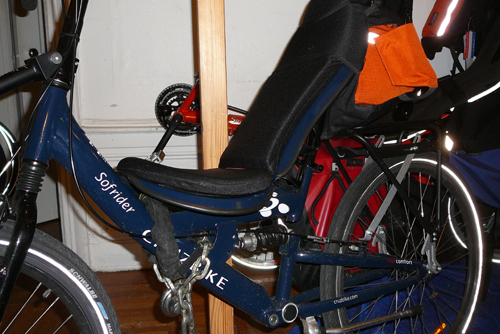 Rack.
I'm using an Old Man Mountain Sherpa rack, here shown with standard Axiom rear panniers packed with groceries.  The Sherpa is a well-made, versatile and strong rack that you can install in the manner intended by the manufacturer, which is what we want to do for best results.  I've attached the rack's vertical struts to threaded bolt holes just forward of the rear dropouts.  The forward "horizontal" supports attach to the rear caliper brake bolts.  This is a secure fitting and allows for a decent real world payload.  It is easier to install a seatpost-mounted rack, like the Topeak models, but their typical payload ratings of 20 lbs. isn't enough for (my) grocery shopping.  For those concerned about weight, be aware that the 32-ounce Sherpa is not lightweight.  Also, note that the rack is rated for a payload of 40 lbs.  My belief is that the rack will support a heavier payload for a short time, but for a longer trip I'd stay below the 40 lbs. payload rating. (Errata: I had  originally written in this post that the luggage is fully suspended when using the Sherpa rack, but the luggage is not suspended since the rack is attached directly to the rear wheel.  If one were to use a seatpost-mounted rack, then the luggage would be suspended.) 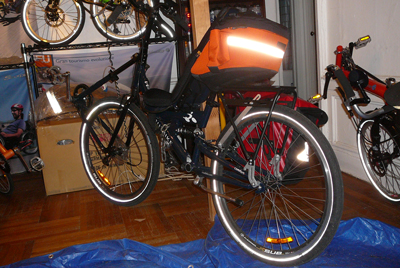 Seatback bag.
I'm using a Radical Designs Solo Aero on the back of my seat.  You can buy it from New York City Recumbent Supply.  This is an excellent, well-made, capacious bag of 12 liters volume.  That's about half a good-sized daypack.  It quickly slides down over the seatback and comes off just as fast.  With the carrying strap it's easy to manage.  Reflective tape on the back.  Comes in five pretty colors.  I love it.

Wearing a lock.
Another detail that makes the Sofrider good for a city bike is that there is a hole in the frame where you can string a lock.  While riding, I loop a chain-style lock two-times through the frame and under the seat.  The lock hangs a bit loose and sometimes makes noise, but it hangs out of the way of the wheels and contributes its weight in a useful place -- right under the seat.

Where are the fenders...
I haven't gotten around to adding fenders and I've suffered for it.  I need to add them soon.  The last rain was cold and wet and dirty. 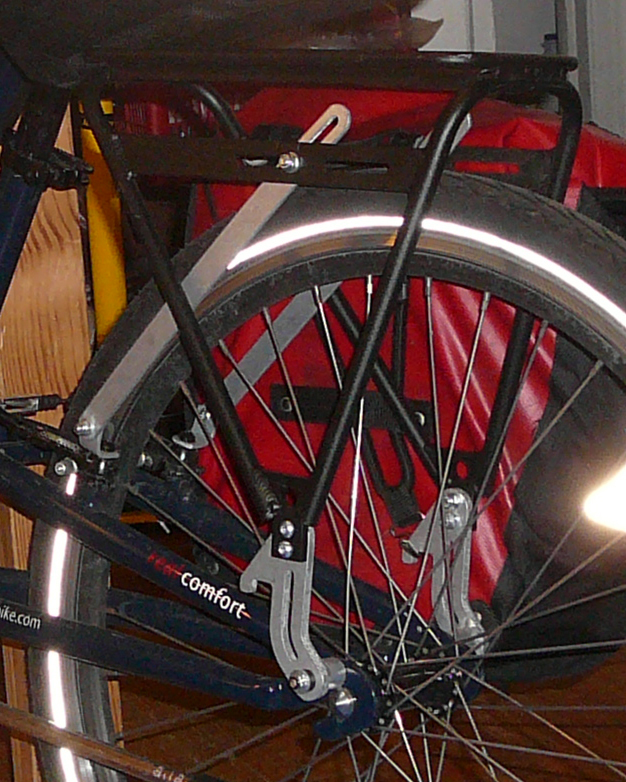 Sherpa installation.
On the Sofrider, I want to keep the weight forward of the rear wheel as much as possible so the front wheel doesn't lose traction on the hills.  So, I've mounted the rack backwards, with the rear of the rack turned to the front, to bring the carrying rails as far forward as possible.  Then, I mounted the vertical supports such that the curve of the vertical adapter moves the rack forward of the rear axle.  I have also used the fender mounting holes in front of the axle.  This is not so much to move the rack forward as it is to allow me to use my front wheel Pitlocks on the non-drive (rear) wheel.  The installation would be stronger if I attached the vertical supports to an extra long quick release through the axle, but I much prefer to keep the wheel locked.  So, I guess I'm living on the edge a bit.  If I had done this for a customer, as opposed to for myself, I'd have used extra long Pitlock skewers through the axle and mounted the rack's vertical supports on those extra long skewers, because that is really the right way to do it.  Notice that the mounting rails on the Sherpa come well forward of the rear axle.  It's easy to load the panniers so the weight is forward of the rear axle.  When the rack is installed like this, the front drive wheel maintains a good grip on the street even with heavily loaded panniers.

Have fun and stay healthy,

New Jersey Transit, recumbents on board

A customer wrote me:

"Any knowledge about if New Jersey Transit will allow it [an HP Velotechnik Grasshopper fx] on the train?"

NOTE: The rules may change over time. If you have expert knowledge or personal experience with NJ Transit that is at variance with what I've written here, please send me a comment with specifics, if possible, to help me keep this blog entry current.

Before all else, what is a bike?

Here is NJ Transit's definition of a bicycle, in case you weren't sure if you were riding one:

“Bicycle” means any two wheeled vehicle having a rear drive which is solely human powered and having a seat height of 25 inches or greater when the seat is in the lowest adjustable position.

- Collapsible bicycles are permitted on all NJ TRANSIT trains at all times.

- Standard-frame bicycles are permitted on many NJ TRANSIT trains as described below:
. On weekdays - Bicycles are permitted on all weekday trains on all lines except inbound trains that end in Hoboken, Newark or New York between 6 a.m. and 10 a.m. and outbound trains that originate in Hoboken, Newark or New York between 4 p.m. and 7 p.m. These trains will be designated by a bicycle symbol in public timetables. Trains on which bicycles are permitted may accommodate up to 2 bicycles on each single-level rail car and up to 8 bicycles on each multilevel rail car subject to crowding or the accessibility needs of other customers.

. On weekends - Bicycles are permitted on all weekend Raritan Valley, Gladstone, Montclair-Boonton, Main, Bergen County, Pascack Valley, Port Jervis, and Atlantic City Line trains. These trains will be designated bike trains and will accommodate up to 12 bicycles per train. Larger groups may be accommodated with advance reservations by calling our Group Sales Department at 973-491-7220. Bicycles are also permitted on all Northeast Corridor, North Jersey Coast Line and Morristown Line trains with the exception of trains ending in New York between 9 a.m. and 12 p.m. and trains originating in New York between 5 p.m. and 8 p.m. Trains on which bicycles are permitted may accommodate up to 2 bicycles on each single-level rail car and up to 8 bicycles on each multilevel rail car subject to crowding or the accessibility needs of other customers.

. Other times - Bicycles are not permitted on substitute bus service during rail service outages.


When I first wrote this entry, the published rules were unclear as it relates to recumbent bikes.  At that time, one conductor told me that recumbents are fine and another told me they were not.  Another told me that all bikes were prohibited on rush hour trains (I hadn't realized I was on one) and that particular conductor said he'd have to "let me off" at the next station, about 70 miles from where I had intended to start my weekend bike camping trip.  (What?  Please say you don't mean it!)  Fortunately, I had a Grasshopper fx folding recumbent and he let me proceed as long as I folded it and stowed it out of the way.

Neile Weissman, a NY Cycle Club ride leader and bent rider, has worked hard to make it possible for cyclists to take bikes on NJ Transit.  Still, individual conductors have a great deal of discretion.

The current rules clearly give conductors the right to bar 'bent riders from taking their bikes on NJT.  You can not -- and should not -- argue with the conductors.  If you want to change the rules, then you need to actively advocate for better 'bent access.

General guidelines for taking your recumbent bike on any train in the region.

Make sure you have a bungie cord or rope to secure your bike.  Cover the chain ring.  If you must take transit, take a short wheelbase 'bent.  Even better if it folds.  Do what the "nice" conductor says and always be cooperative and polite, even if he or she tells you to take your bike off the train.  It's understandable if you don't like it, but on-board is not the time or place to try and make a stand, and your issue isn't with the conductor anyway.  Take it up with the people in the NJT office...politely.  Give them every reason to say "yes."

Please try and remember that when you're riding a 'bent, you're representing all bent riders.  If you're polite and cooperative, you make us all look good and that may be one of the best pathways for us to gain better access on transit.  If you're something other than polite, you're ruining things for yourself and everyone else.

If you have a recent story about taking your 'bent on NJT which may help others negotiate the system, please send it to me as a "comment" on this entry.

I'm a long time user of Schwalbe Marathon Winter tires and ride all winter with them. I've also used, extensively, Schwalbe's other studded tires that are designed for snow/trail. On the Marathon Winter, the studs are carbide steel -- like a drill bit for drilling concete -- and, as a result, they stick well to pavement or ice and wear down slowly.

The Mara. Winter stud pattern is such that the four rows of studs are mostly to the side of the contact patch when the tire is inflated to the max. PSI -- so, the rider increases PSI on clear road days to minimize rolling resistance. On icy days, the rider drops the PSI to bring all four rows of studs into the contact patch. I put them on my commuting bike in early Nov. and leave them on till the snow is gone for good. I just alter the PSI to optimize them for the current conditions. They have high rolling resistance, esp. when I drop the PSI, but, partly as a result, I come out of winter strong.

1) Always ride cautiously and within your capabilities, even with amazing cool new equipment.

2) Studded tires require skill and attention as does any tire under any condition. They're not magical, though I wish they were. A studded tire will slide on deep slush; so will a crampon. Also, as with any piece of equipment, it takes practice to learn how to use them well.

3) Cars/trucks may move unpredictably and uncontrollably on icy and snowy days, sliding sideways, backwards and forwards and also may not be able to see well through fogged windshields and falling snow. With studded tires on an icy road, I may have more control than the nearby drivers and this creates a new hazard.