Are there any special considerations when buying a car rack to carry a recumbent bike?  Even though this is New York City, where many cyclists don't own cars, I still get a fair number of inquiries about car racks to carry recumbents.  To respond to those inquiries, I plan to update this blog post when I receive notes from riders who have successfully used racks and recommend them.

One of my customers loves this brand:
Atoc
http://www.atoc.com
I especially like these racks because they don't require a lot of upper body strength to hoist the bike onto the rack.  Made in the USA.

Lightfoot Cycles has a nice article about car racks.
http://www.lightfootcycles.com/transporting.php

Rack for a Cruzbike: Hollywood Racks

David D. wrote me the other day:

I have been enjoying my [Cruzbike] Quest bike. I wanted to give you some feedback on what I discovered about bike racks to carry the quest.  Thule has a hitch carrier that has a spring loaded upside down U-shaped arm that will hold the front wheel and I believe that it has movable wheel wells. This carrier functions to hold the bike in a similar fashion to carriers I have seen on the front of some buses. I don't know the model number but I was able to mount the bike on one at a show room.

The rack I did buy was somewhat less expensive but seems to work quite well is made by Hollywood Engineering Inc. (www.hollywoodracks.com). My rack is  Model HR1000R - two bike capacity MSRP $319.99.  It works pretty well, will hold two recumbents securely with minimal mounting effort. To use it for my Quest I remove the two finger nuts which hold the seat to the horizontal bike tube.  I will take a photo of the bike on the rack and forward it later. 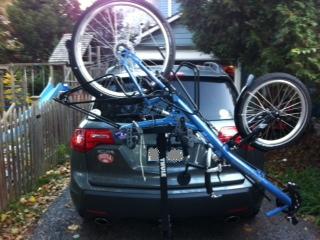 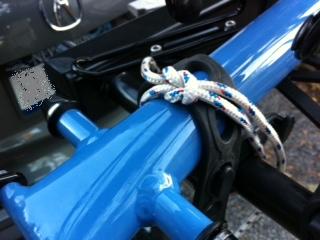 "Attached are the pics of the bike on the car.  My kids spend about 3 hours on saturday mornings at a kind of extra-school thing about 15 miles from home, and I drove there with the bike on the rack so I could go for a ride.  You'll see the pic that we took with it on the rack in brooklyn, with the seat, and then one I did at home without the seat.  I found that I needed the seat off to accomplish the most interesting picture ... the SMGTe as one of FOUR bikes on the rack.  I think that this was only do-able because my kids bikes are small (16 inch wheels), and that once they move the bigger bikes I'll need to take everyone's wheels and pedals off but it should still work.  The recumbent's handlebars are the biggest problem.  I also attached a pic of how I attached it to the rack ... with the seat off and needing to fit all 4 bikes, the center of gravity is WAY off and it was stressing that rubber safety belt.  I used some sailing line that's meant for heavy loads and tied it with a square knot (gets tighter as pressure is appplied but still easy to untie), so that it was that line rather thant he rubber belt was taking the weight. 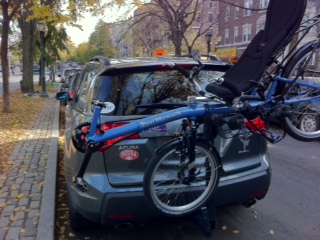 "I smudged out my license plate number in case you want to send the pics to customers who ask whether the bike can go on a rack.  I can't endorse that the method is for every rack, car, or person, but it worked for me!  Also, my wife's car - the MDX - is particularly wide.  If I try to put it on my car, which is small, I may want to angle it differently so that it doesn't "stick out"...."

If you have a good rack solution for your bent and would like to share it with others, please send me photos, brand and description so I can post it.